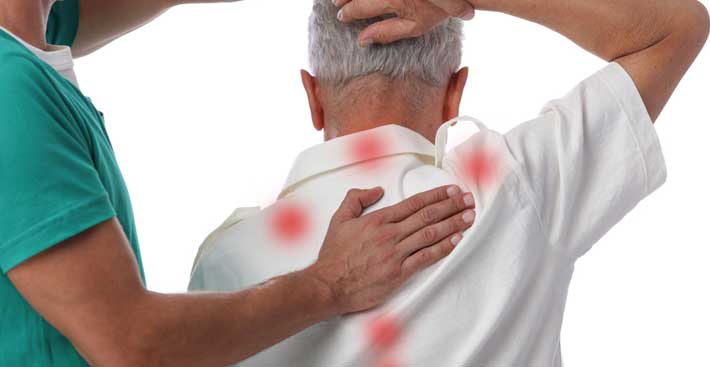 Neck and shoulder pain is a common complaint. Population studies have shown that 20-65% of women and 15-40% of men have experienced neck and shoulder pain at some point in their lives4. Headache is also a common ailment affecting humans with a point prevalence of 16% in the general population5.

As neck pain or neck pain and headache is so common, the need for effective management is clear. Physiotherapy is one of many forms of treatment for neck disorders. Physiotherapy encompasses a variety of interventions such as manipulative therapy, therapeutic exercise and postural advice and education. The question of efficacy of these interventions is important to answer as evidence based practice becomes increasingly important. Therefore the purpose of this paper is to review the scientific evidence for the efficacy of physiotherapy in the management of neck pain.

The main body of literature in regards to treatment for spinal pain concerns the lumbar spine. Evidence of efficacy of treatments for the cervical spine is more recent and quality trials are now beginning to emerge. It has only been in the 1990’s that systematic reviews are being introduced into the literature.

The Australian National Health and Medical Research Council (NHMRC) has issued guidelines which allow readers to judge the strength of the evidence on which recommendations are based. Level I evidence represents the desired standard on which to base clinical decision making. This evidence is ‘that obtained from systematic reviews of relevant randomised trials (with meta-analysis where possible).’ This level of evidence is therefore the strongest when considering treatment efficacy. Level II evidence is ‘that obtained from one or more, well designed randomised controlled trial.’ This position paper will only consider Level I and II evidence when examining the efficacy of treatment for cervical spine pain.

A systematic review by Koes3 assessed the quality of 35 RCT’s comparing manipulative therapy with other treatments for back and neck pain. Only five of these trials examined neck pain. All trials were scored according to their methodological quality. They found that most of the RCT’s scored poorly, that is they showed major methodological flaws. Koes3 concluded that although there are some promising results, the efficacy of manipulation has not been convincingly shown.

For subacute and chronic neck pain, Hurwitz2 reported on five RCT’s on manipulation for this type of pain. Data from three of these was able to be statistically combined for outcomes measured at three weeks after initial treatment. The result of this did not quite reach statistical significance but Hurwitz2 did state that “it is more than 90% probable that the difference in means favours the groups treated with manipulation” (p 1752). Only one RCT examined mobilisation as treatment for subacute or chronic neck pain. Only one study reported on long term results therefore Hurwitz et al could not determine the long term effect of manipulation or mobilisation.

Gross1 have conducted a meta-analysis on conservative management of mechanical neck disorders. This review aimed to investigate the efficacy of various forms of conservative treatments in adults with neck pain without neurological deficit. Manual therapy was one of the treatments they investigated. Meta-analytical techniques were used aiming to synthesize the clinical evidence to allow for increased statistical power and to give a better indication of treatment effects. In examining manual therapy, this was done when it was used alone or in combination with drug therapy, education or physical medicine modalities. In regards to manual therapy alone four controlled trials were retrieved. Two of these examined the effectiveness of manipulation and one mobilisation, which was in the form of hold/relax techniques. These trials all report non-significant effects. They could not be combined quantitatively as raw data could not be obtained. In one trial by Vernon et al, the only outcome measure was pressure pain threshold, which did show significant results but due to the type of measure could not be combined with the other trials. Therefore although these trials report no benefit from manipulative therapy used alone, they do not have the statistical power to definitively state that manual therapy alone is not effective.

Gross1 identified six trials, which used manual therapies in combination with other forms of treatment. One study by Brodin et al found mobilisation significantly decreased pain compared with control and physical modality groups but because raw data could not be obtained this trial had to be excluded from meta-analysis. The other five studies examined the effects of various forms of manipulative therapy for neck pain all with positive outcomes. Therefore five studies could be combined and outcomes compared between one and four weeks. Even though each study examined different types of neck pain the authors felt they were similar enough to combine. This combination yielded a pooled effect size of -0.6, which indicates a moderate to large reduction in pain.

In summary, this meta-analysis provided evidence to support the short term benefit of manual therapy in combination with other treatments for the treatment of mechanical neck pain. As with the Hurwitz et al review, long term results were only reported on in one study so the long term effects of manual therapy could not be reported on.

No Level I evidence exists that adequately assesses the efficacy of exercise in the treatment of neck pain due to the lack of suitable trials in the literature. There are some recent Level II trials which show benefit of certain exercise protocols in decreasing neck pain.

There is no Level I or II evidence available on Pilates therapy, Feldenkrais therapy, Alexander techniques or bed rest.

The present Level I evidence available can not draw clear conclusions regarding the efficacy of traction for neck pain due to the poor quality and low statistical power of the available literature. Of five RCT’s investigating cervical traction, three had negative outcomes and two positive.

In regards to Level I evidence for electro-physical agents there is limited support for pulsed electromagnetic therapy. This has to be regarded with caution as it is based on results from only two trials and therefore has low statistical power. The only other Level I evidence is for laser therapy. Two reviews have stated poor effects of laser but again this must be regarded with caution due to low statistical power and poor quality of the trials on laser therapy. Level II evidence of various electrotherapy modalities has varied results and is detailed in the attached document.

Level I evidence on acupuncture can also not make firm conclusions regarding the efficacy of this treatment for neck pain due to limited data. Of seven RCT’s on acupuncture, six report positive outcomes of using acupuncture for neck disorders.

No Level I evidence exists to comment on the use of biofeedback for neck pain but one RCT does report positive effects of EMG mediated muscle relaxation.

No Level I evidence comments on the efficacy of cervical collars. Three RCT’s were located with only one showing positive outcomes of cervical collars. One study found subjects who were encouraged to engage in normal activity had a better outcome than those who used a collar.

No Level I or II evidence was found on the use of antidepressants for neck pain. No Level I evidence could draw firm conclusions regarding the efficacy of muscle relaxants, anti-inflammatory medication or analgesics due to the lack of literature and unsuitable trial design. There is some Level II evidence for muscle relaxants with varied results.